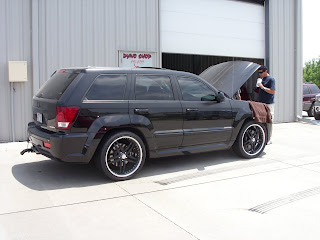 As any real hot rodder knows, plans can change without notice. The famous last words; "It ran great yesterday" were ringing in our ears today.

The Jeep SRT8 we planned on driving with its 22" bonspeed Delta wheels, supercharged Hemi, Eibach suspension and stainless exhaust rolled over dead. The flat black over gloss paint gleamed in the Midwestern sun, but the fire of the engine could not be created. The verdict is a dead PCU and in a computer controlled car that is certain death.

The bonspeed boys gave it their best to raise the car from the dead, we changed the battery, checked wires, connections and Mark even called dealers trying to hustle a new computer. We finally ruled the car out of commission as the day dragged on and we were losing road time.

Grimes didn't leave us high and dry driving a rental car on Power Tour, no way! We went back to his shop and dug out the back-up car. Stored just waiting for a chance to tour was his 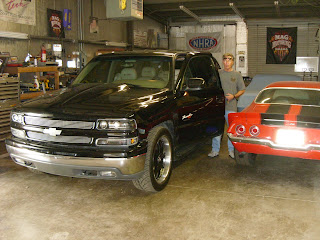 Supercharged Thunder Edition Tahoe. Have you started to get the idea that Mark really likes supercharged rides? Yes, he does and we are glad he had another ride waiting on the side lines.

Ok, so day one has begun with a problem, but it was quickly resolved and we made it on the road. It was too late to make the Iowa stop of Power Tour as we rolled in about two hours late. No worries, we will catch up with the tour in the morning.
Posted by bonspeed boys at 8:14 PM